The sanctuary is built on a hill just outside the village, overlooking the lake. It is flanked by a small 15ᵗᴴ   century   monastery   built   when   the   original   church   was   enlarged.   The   simple   lines   of   the churches Romanesque façade, with its rose window and window is completed by a bell gable and Renaissance   door.  The   interior   has   a   trussed   roof   and   three   Baroque   altars.  The   main   altar   is decorated with a 14th

century fresco depicting Our Lady and Child with two Saints. The side altars are dedicated to St. Francis of Paola and two beatified members of Order of the Minims. Some traces of frescoes are still visible on the walls. To the right are three chapels created from what had previously been the monastery. A small cloiser completes the complex

The feast of the “Madonna del Monte
The feast of the “Madonna del Monte”(14th of May) is the most important religious event of the year and celebrates the ancient popular vernal rites of offerings. Here the sacred and the profane peacefully coexist, being Maia, Cerere and Feronia three Etruscan goddesses related to the rites of fertility, abundance, harvesting and the cycle of the seasons. The feast is also called “delle Passate” or “Barabbata” word difficult to explain and of uncertain etymologic origin. At dawn the roll of drums, the bells, the fire-crackers, the reapers  choir start the celebrations. A peculiar historical parade walks from the shores of the lake up to the Sanctuary where wheat, fruits, vegetables, olives are offered to the Madonna. A profusion of colours, scents and sounds make this a very special day

The decoration of the Church door
The door has been decorated by the Casenghi since the late 19ᵗᴴ century. In 1985m the 500 ᵗᴴ anniversary of the reconsecration of the church, the decorations were extended to the windows, the start of the elaborate decorations we see today. Flowers, fruits and vegetables are arranged in a pattern against a background of interwoven laurel branches and ears of wheat. Similar decorations and agricultural implements are used to adorn the windows of the monastery 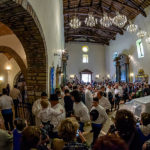 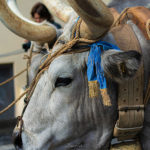 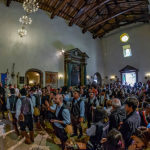 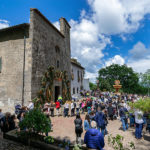